BITX – An easy to build 6 watts SSB transceiver for 14MHz

BITX is an easily assembled transceiver for the beginner with very clean performance. Using ordinary electronic components and improvising where specific components like toroids are not available, It has a minimum number of coils to be wound. All alignment is non-critical and easily achieved even without sophisticated equipment. The entire instructions to assemble the rig are given here along with relevant theory. The Indian hams have often been handicapped by a lack of low cost equipment to get them on air. A mono-band, bidirectional design using ordinary NPN transistors was developed to cater to this demand. The design can be adapted to any particular ham band by changing the RF section coils and capacitors and the VFO frequency. BITX evolved over one year from the excellent S7C receiver described in the new ARRL book Experimental Methods in RF Design (an ARRLpublication) into a bi-directional transceiver. Several hams across the globe contributed to its design. A series of emails were exchanged with OM Wes Hayward (W7ZOI) during the evolution of this design. His contributions have been invaluable. He urged me to strive for higher performance from the simple design. The resultant rig has sensitive receiver capable of strong signal handling, a stable and clean transmitter capable of enough power to make contacts across the World. All the parts used in BITX are ordinary electronic spares components. Instead of expensive and hard-to-get toroids, we have used ordinary tap washers. Broad-band transformers have used TV balun cores. The entire transceiver can be assembled in India for less than Rs.300. I have designed a single side PCB with large tracks that can be easily etched at home or by any PCB shop. They are also available from OM Paddy, (VU2PEP, pepindia@yahoo.com).

For those who don’t read long articles …

There are a couple of things you should know before you start assembling the circuit:

In any bipolar transistor, the current flowing from the collector to emitter is a multiple of the current flowing from the base to the emitter. Thus, if there is a small change in the current flowing into the base, there is a bigger change in the current flowing into the collector. What follows is a highly simplified explanation of working of the above amplifier. In the above circuit, imagine that a small RF signal is applied through Rin to the base of Q1. Also imagine that the Rf voltage is swinging up. The transistor will accordingly amplify and increase collector current causing more current to flow through the Rl (220 ohms) collector load. This will in turn drop the voltage at the collector. The drop in voltage across the collector will also result in a drop at the base (base voltage is a fraction of the collector voltage due to the way the base is biased). This circuit will finally find balance when the increase in base current flowing from Rin is balanced by the decrease in base current due to the voltage drop across Rl. In effect the RF current entering from Rin flows out through the feedback resistance (Rf). The impedance seen at the base is effectively very low and the signal source will see an approximate input impedance of Rin. Thus, Vin/Rin = Vout/Rf (Eq.1) Another factor to consider is that that emitter is not at ground. At radio frequencies, it looks like there is a 10 ohms resistor between the emitter and the ground. Thus, when the base voltage swings, the emitter will follow it. The AC voltage variations across the Re (10 ohms) will be more or less the same as that across the base. The current flowing into the emitter will mostly consist of collector current (and very little base current). Thus, if the emitter current almost equals collector current, Ie = Vin / Re = Vout / Rl (Eq. 2) We can combine these two equations to arrive at: Vout / Vin = Rf / Rin = Rl / Re. (Eq. 3) This is an important equation. It means several things. Especially if you just consider this part: Rf / Rin = Rl / Re. (Eq 4) Lets look at some interesting things: In order to make bidirectional amplifiers, we strap two such amplifiers together, back to back. By applying power to either of amplifiers, we can control the direction of amplification. This is the topology used in the signal chain of this transceiver. The diodes in the collectors prevent the switched-off transistors collector resistor (220 ohms) from loading the input of the other transistor. A close look will reveal that the AC feedback resistance consists of two 2.2K resistors in parallel, bringing the effective feedback resistance to 1.1K. Thus, the above analysis holds true for all the three stages of bidirectional amplification. Diode mixers The diode mixers are inherently broadband and bidirectional in nature. This is good and bad. It is good because the design is non-critical and putting 8 turns or 20 turns on the mixer transformer will not make much of a difference to the performance except at the edges of the entire spectrum of operation. The badness is a little tougher to explain. Imagine that the output of a hypothetical mixer is being fed to the next stage that is not properly tuned to the output frequency. In such a case, the output of the mixer cannot be transferred to the next stage and it remains in the mixer. Ordinarily, if the mixer was a FET or a bipolar device, it usually just heats up the output coils. In case of diode ring mixers, you should remember that these devices are capable of taking input and outputs from any port (and these inputs and outputs can be from a large piece of HF spectrum), hence the mixer output at non-IF frequencies stays back in the mixer and mixes up once more creating a terrible mess in terms of generating whistles, weird signals and distorting the original signal by stamping all over it. A simple LC band pass filter that immediately follows the diode ring mixer will do a good job only at the frequencies it is tuned to. At other frequencies, it will offer reactive impedance that can cause the above mentioned problems. It is requirement that the diode mixers inputs and outputs see the required 50 ohms termination at all the frequencies. In other words, they require proper broadband termination. Using broad-band amplifiers is a good and modest way of ensuring that. A diplexer and a hybrid coupling network is a better way, but it would be too complex for this design.

Set the VFO to correctly cover 4.0 to 4.4MHz. If you can, take your rig over to a ham friends shack, you can monitor your VFO on his rig at the edge of 80 meters band at 4.0MHz. Set the trimmer so that you can hear the VFO when the friends receiver is tuned to 4.0MHz and your tuning capacitor is fully closed (as much as it will go anti-clockwise). After this, connect the antenna and peak the RF coils for maximum noise in the speaker. If you can tune it to a weak signal, then peak the RF coils for best reception. You might find that although you are able to tune in CW stations, you are unable to hear the SSB stations properly. This indicates that your BFO is not properly set. We will take that up next. On amateur bands above 10MHz, SSB is transmitted on upper sideband and on bands below 10 MHz, it is transmitted on lower sideband. To tune a upper side-band signal, your BFO has to be at the lower edge of the crystal pass-band. You will require either the inductor (for USB) or the capacitor (for LSB) in series with the BFO crystal. If your BFO is set to proper frequency then the signals will tune in and as you continue tuning across the signal, they will drop in pitch and disappear. If the signals appear muffled, then the BFO is set in the crystal filters center, add more turns to the coil (USB), or tweak the trimmer (LSB). If the signals appear shrill and you are unable to zero-beat them, then the BFO is too far away from the filters frequency – Decrease the coils turns (for USB) or tweak the trimmer (LSB). The transmitter tune-up essentially involves setting the carrier null. It is best to tune up the transmitter on a dummy load. I use 8 220 ohms, 2 watts resistors in parallel as my dummy load. It is worth the few bucks to have a proper dummy load. Attach the dummy load on the transmitter, and attach an RF probe to the dummy load (or an oscilloscope). As you speak, you should get 20 volts or more peak voltage on the dummy load when you whistle or just go “haaaaallow”. On another receiver in the same room, connect a short piece of wire as an antenna and monitor your own signal. You will probably be able to hear your own carrier as well. Null it by tweaking the 100 ohms preset and the 22pf balance trimmer. They both interact, so you might have to go back and forth between the two controls. A word of caution, the diode mixers are prone to generating odd harmonics. The third harmonic of 4 MHz is at 12MHz. So, if you simply peak the coils for maximum output on transmit, you might wrongly peak the RF front-end to 12 MHz (I did that). The RF band-pass filter is best tuned in receive mode over a weak signal at 14.150MHz or so and left at that.

There might be a kit (components and the PCB in a bag) soon. I personally don’t have the time to put kits together. If somebody is interested in doing so, just go ahead and do it. The design is free, you dont need to ask my or anybody elses permission. If you can drop me a line, I will list you as a kit supplier on my site. This is also the first time I have put out a PCB design for my rig. The purpose is to address the need among Indian hams in particular for an SSB rig that is easily and cheaply built. My original aim was to keep the price under Rs. 1000. The current design brings the cost to well under Rs.300 (less than 7 dollars). 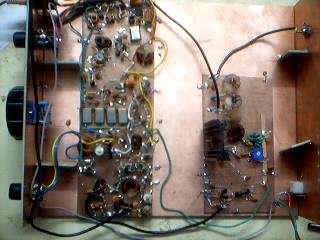 The top view of the transceiver The big board has the entire exciter. The smaller board on the right is the linear 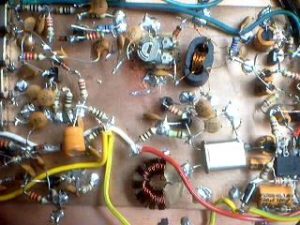 The RF front-end shows only two coils in the RF filter, the third was added later. The upper coil is the VFO. The mixer transformer is seen on the lower right part of the picture. 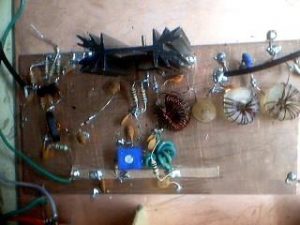 The Power chain The IRF510’s heat sink is soldered onto the ground plane. Use a mica washer to isolate the IRF510 from the heat sink.

The PCB layouts (No longer available)

The main board is 8.5 inches by 3 inches. The power amplifier board is 4 inches by 2.5 inches. Download the PCBs here Note: The PCBs are in GIF format. They are also in word doc format so that they print at correct size. If you are getting the PCBs made somewhere, be sure to tell them the exact dimensions of both the boards.